By the time we had sorted out the tyre problem last night it was getting fairly late, so we had a small but enjoyable meal in an open-air restaurant beneath the walls of Collioure’s fine castle before retiring. Our hotel is Catalan in style, set around a series of courtyards, one of which hosts a tempting but chilly-looking pool. For the first time on our trip we’re surrounded by English voices, and seeing cars with British number-plates.

We awoke this morning to gloomy skies, to our disappointment. By the time we had finished our breakfast, though, the skies were clear blue and the temperature rising quickly. We restored the wheel with its pristine new tyre to our tandem. The rest of the tandem looks somewhat less than pristine – it too has worked hard, after all – but nothing that soap and water won’t cure. We left the hotel through the shady arch that separates it from the outside world.

Our route took us initially in the direction of Port Vendres. Leaving the beautiful harbour of Collioure behind us, sparkling in the sun, we climbed out of town, past the rather Orwellian-sounding Centre de Reeducation Fonctionelle.  We were trying quite hard to be gentle with the tandem, given the mechanical difficulties of the last couple of days – it felt almost as though we were tiptoeing up the hill, hoping against hope that nothing would break and keep us from our final goal. 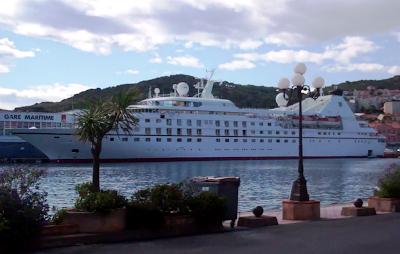 The top of the first col of the day was soon reached, and we dropped down to Port Vendres, a cheerful-looking place with a fairly large cruise ship moored in its harbour. The descent, and the trip around the quayside, gave us some respite before the next and highest col, one of two we had to climb before arriving at the next town, Banyuls-sur-Mer. We climbed past vines labelled with the local Banyuls-Collioure appellation, past aloes and prickly pears, even past a blackberry bush, bearing plump fruit tantalisingly out of reach on the steep scrubby terraces at the side of the road.

These were our first serious climbs in days, and gave us the benefit of striking views over the frilly, fractal coastline and the increasingly steep slopes forming the foothills of the Pyrenees. We could see north to the coastal towns through which we passed yesterday: St Cyprien, Canet-en-Rousillon and Le Barcarès. The view south to Spain though, was blocked by the hills we’d still to climb.

Two cols later we swooped down into Banyuls-sur-Mer which, incidentally, is twinned with the lovely Yorkshire Dales town of Settle, and looks nothing like it in any way! Again we had the benefit of level ground for a while then, all too soon we started uphill again. The temperature was rising all the time, eventually reaching thirty degrees, and we were grateful for the three bidons of water we carried on the tandem. 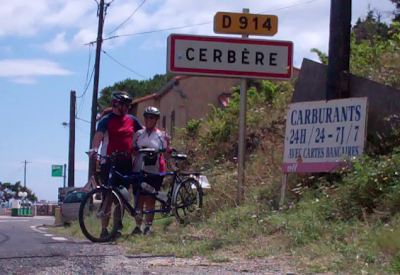 The next and final town on our southward journey was Cerbère. We were by now receiving considerable encouragement from people who were reading the sign on the back of the tandem and realising we were approaching our goal. We had realised earlier in the trip that we’d misspelled Cerbère on the sign, adding an erroneous ‘s’ on the end. Fortunately, either no-one noticed or they were too polite to point out our mistake!
A series of headlands, rising in altitude, separated us from the town. Surmounting the last of these we spotted Cerbère at last, and began the long descent to the harbour, stopping for photographs by the sign at the entrance to the town. It felt wonderful to have arrived. 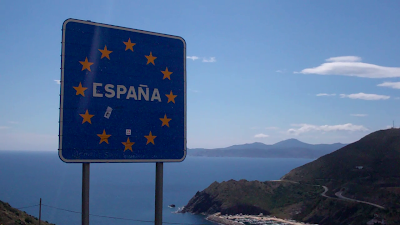 Our journey, though, was not yet complete. Four more kilometres and another hefty climb separated us from our true final destination, the border with Spain. So, having spotted some candidate restaurants for lunch on our return to Cerbère, we set off uphill, encouraged by tooting horns and occasional unintelligible shouts of support from inside passing cars. A series of hairpin bends took us up, followed by a long straight climb before a sharp bend in the road brought us to the former customs post, now a (sadly closed) bar. A hundred metres later we reached the border, or at least the sign saying “France”. The corresponding sign reading “España” was, curiously, a little way downhill on the other side. To be absolutely sure we rode past it, ensuring that both wheels and all four feet were firmly placed on Spanish soil. It was a deeply satisfying moment for both of us. A friendly French couple took pictures of us with our camera (giving us one last opportunity to do “The Joke”), and we savoured the views south into Spain for the first time.

Right, job done! Well, of course we still had to ride back to Collioure, across all the same cols. First though, we needed to refuel. The four kilometres back to Cerbère seemed to take no time at all. Just before we arrived we finally removed the sign from the back of the tandem, not wanting anyone to point out that we were now going the wrong way! 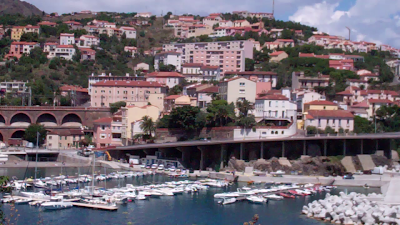 So, what did we choose for lunch? Paella du Chef, of course, and very fine it was too, in a harbourside blue-canopied restaurant. We washed it down with modest quantities of beer then remounted the tandem for our return journey. Curiously, even though we had removed the sign, we still received lots of encouragement. Perhaps this is because tandems are more rarely seen in France – we have only seen four others in our entire journey.

Our friendly lunchtime waiter had kindly refilled our bidons with ice-cold water, for which we were extremely grateful as we reascended the cols in the searing heat of the afternoon. The road was busy and narrow, so we stayed close to the kerb to let the cars pass. Finally we descended to Port Vendres and began the last, more gentle climb over to Collioure, passing the “Petit Train” (a tourist road-train, ubiquitous in French coastal towns), only to suffer the ignominy of being re-passed by it further up the hill! At last we dropped down into Collioure, ascended Rue de la Republique, turned right, arrived at the hotel, and stopped pedalling.

So our journey is done, and what an experience it has been. This is our last posting for now, no doubt we will post some reflections on the journey when we have arrived back home. We’d like to say a big thank-you to those who have helped us, both before we set off and en-route. In particular, we’d like to mention Ruth and John at the fantastic J.D. Tandems in Gargrave, and to the helpful people we encountered at the various cycle shops here in France.

Tomorrow, we shall be by the pool. Not a pedal will be turned!