..in which we meet a talented dog in a friendly bar.

Our hotel in Ardres was small but perfectly formed. We dined on Poissons en Papillote (Clare) and Boeuf Bourguignon (Jonathan), and drank a most acceptable bottle of Saumur-Champigny. The restaurant was largely populated with ex-pat Brits en-route to England in order to avoid the French summer holidays, it was clearly a popular spot, and deservedly so.

We exercised our French language “skills”, somewhat hesitantly. We both speak Italian to a much higher standard than French, so that even when we embark upon a sentence in French it often changes into Italian at the first sign of difficulty. So not so much “Let’s Parler Franglais” as “Let’s Parler Frangliano”. It was only a last-minute correction that prevented Clare from asking the hotelier if she could borrow a horse-drier! 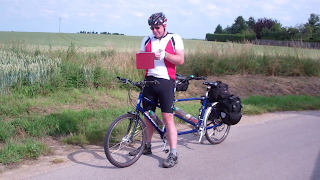 We were greeted with cloudy skies at breakfast-time as we cycled south toward Lumbres, but the clouds rapidly cleared and we continued under blue skies. The roads became progressively more quiet – much more so than equivalent ones in Britain. As our legs warmed up we started to ascend onto a plateau, crossed on occasion by small valleys running east to west. It felt good to be exposed to some early climbs – any “start-of-ride” cobwebs were soon blown away, as we passed fields of wheat, barley, maize, beetroot and peas. Frequently we encountered poppies at the side of the road, in vivid red patches. We were surrounded throughout the day by stunning vistas – we normally pass through the Pas de Calais at high speed on the autoroute, what delights we miss.

It’s surprising how quickly one relaxes into long distance cycling mode. Our profession is a cerebral one, and entirely sedentary. How lovely, then, to be worrying about nothing more than the gradient of the next hill and the potential location of lunch. Actually, lunch was more problematic than we expected, today being Sunday. We tried a bar in Delettes, which served fine cool beer, but Madame seemed alarmed by the prospect of having to serve food! 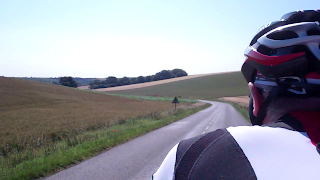 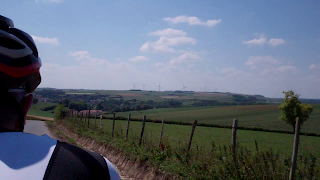 We cycled on, soon arriving at a planned detour off the road onto a small track. After 200 metres it became apparent that the track was covered in small sharp pieces of flint. Fearing a succession of punctures we retreated to the road and planned a different route. It was getting late for lunch as we cycled through Fléchin and spotted a café-bar. What a welcome – the proprietor could not have been friendlier, and persuaded his dog Oscar to perform tricks for us as we ate delicious ham baguettes. We were not allowed to leave without coffees on the house, and all the staff came out to wave goodbye.

The climbing continued for a while after lunch, until we arrived at Palfart (oh stop it!), thereafter we reaped our reward in the form of a long gentle descent that seemed to go on for miles. Eventually we dropped into the valley of the Ternoise, and before long were knocking on the door of our hotel.

The first full day had promised to be hard – indeed it was hard, but the weather, scenery and the rolling hills meant that it was very enjoyable indeed. Tomorrow, we continue to Péronne in the Somme region.