… in which we do battle with Zephyrus, the god of the west wind!

Our hotel in Agde was beautifully positioned next to the Hérault river, whose limpid green waters flowed slowly past our bedroom window. Sadly, that was the only beautiful thing about it! It was scruffy, in urgent need of decoration and repair, and the proprietress insisted we pay in advance, presumably in case we decided to move on elsewhere.

It was, though, somewhere clean and quiet where we could lay our heads for the night, and that is the most important requirement of an hotel, after all. Across the river on the quayside were a series of restaurants, each floating on caissons in the river. We ate well, particularly enjoying the plight of our poor waiter, who, providing Jonathan with his paté starter, apologised for the lack of toast, which had blown into the River Hérault as he brought the plates to our table! We also drank a good bottle of wine, before walking the short distance back to the hotel. 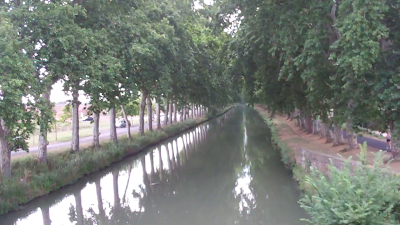 We had hoped for another early start, but breakfast was deemed to be at 8:30, no sooner, no later! Another ten cyclists had arrived overnight, so our first task was to extricate the tandem from behind six mountain bikes. That done, we cycled west out of Agde. The weather forecast for today was not pleasant reading from a cycling point of view – 35kph south-westerly winds, gusting to 65kph. Yuck! To start with, though, it was very pleasant, warm and breezy. We soon turned off onto the minor roads near Vias, cycling alongside the Canal du Midi. The roads were quiet, there were cyclists and joggers aplenty – all in all a great start to the day.

After a while we passed the entrance to Port Cassafieres, local headquarters for Le Boat ( see blogs passim ). Here we recalled a previous visit, when a mendacious Agde taxi driver tried to charge us 60€ for a 20€ trip from Agde to Port Cassafieres. When he tried this on, Clare headed to the boat company office to find out what the correct fare should have been, and Jonathan threatened him with the police. After a couple of attempts to browbeat us, he scarpered, without taking a euro cent, so we had lunch on him!

The roads south of Vias didn’t really follow the coast, and we zig-zagged inland and back to the coast, trying (mostly successfully) to avoid the busy N-roads, often cycling alongside Muscat vines. At Valras-Plage we saw goats, donkeys and a llama, but still no flamingoes, sadly.  Shortly thereafter the road came to a sudden halt at the edge of the River Aude. A helpful man from a nearby campsite indicated that we needed to go down a gravelly track to find the bridge. We followed his advice, and the gravel gave way to tarmac after five hundred metres or so, after which the bridge came into view. Crossing over we headed inland, soon encountering a short sharp climb into a low range of hills with fabulous views over Languedoc vineyards. 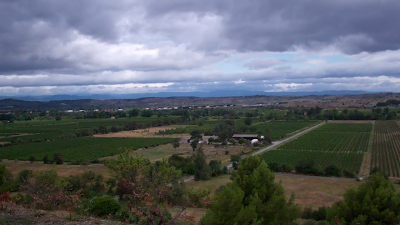 The rolling hills continued for a while as we passed through Salles dAude. By now the wind speed had increased considerably, and we battled into a very strong head-wind for the last ten kilometres into Narbonne. Here we took lunch, and the helpful proprietor refilled our bidons, then put them in his freezer for an hour so they would be cool when we recommenced cycling.

What to say about this afternoon…. Well, it was, um, interesting. The N-road south-west out of Narbonne was unpleasantly busy, and we couldn’t achieve any great pace because of the wind. The promised strong gusts of wind had by now materialised, so we had a very uncomfortable fifteen kilometre ride, stopping occasionally for a drink and a break, before turning off the main road toward Sigean. This turn took us away from the wind, and we took it with some relief.

In Sigean, we were cycling happily along through the town centre when we heard a familiar crack from the rear wheel. Oh no, another broken spoke. We up-ended the tandem and took a closer look. In fact we had two broken spokes close together, both of which had sheared where the spoke joins the “nipple” at the rim of the wheel. This wasn’t good. There were two positive factors though. Firstly, and most importantly, we still had two spare spokes in the bag. Secondly, the broken spokes were on the easier side of the wheel for repair, opposite the cassette. Jonathan set to work, while Clare made enquiries as to the location of the nearest bike shop, as the wheel would need to be “trued” as soon as possible after we fixed it.

Off came the brake disc, tyre and inner-tube, and fairly quickly the two spokes were replaced, and tightened to the “this feels about right” international standard. Well, when “pinged” they sounded a note similar to that of the neighbouring spokes, and the wheel, while certainly not fully true, was good enough to take us the few remaining kilometres to our destination for the day, Port-la-Nouvelle. So, back on went the tyre, inner-tube and brake disc and (hearts admittedly slightly in our mouths) we set off.

A few kilometres later we arrived at Port-la-Nouvelle, which has the air of Blackpool about it, and a similar smell of candy-floss. Our hotel, though, has excellent views over the sea and south to the Pyrenees. 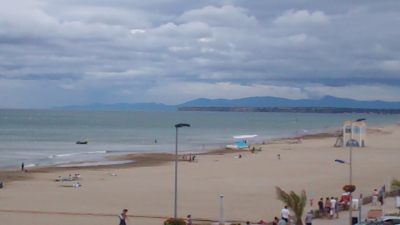 Clare’s research had established that there were two bike shops in the town. The hotel receptionists knew better, unfortunately – both of them had closed down. They suggested we tried a “location de vélo” (cycle hire shop), but as we cycled to it things didn’t seem very promising – the shop was just a hut, and the cycles were mostly four-seaters designed for families. Ah well, might as well try, we thought. Summoning up the French term for the trueing of a wheel (devoillage) we approached the man in charge. “Bien sûr”, he said, and proceeded with masterful speed and technique to return our wheel to the correct, er “wheel” shape! What a stroke of luck, we so nearly didn’t ask him.

So the tandem is (again) restored to health. Of course, we have no further spare spokes. On the other hand, we have only a day and a half to go. Tomorrow’s destination is Collioure, about fifty miles away. The day after, all being well, we will cycle up to the Spanish border from Collioure, then back to Collioure, a distance of some twenty-five miles. Then, our journey (or at least the self-propelled part of it) will be complete.