… in which we battle against the wind again

We wandered into the centre of Vitry-le-François last night to find a lovely central square, dominated by a huge church at one end. We enjoyed very good pizzas and some wine, and turned in fairly early. We’d wondered what the ‘le-François’ signified – apparently Charles V razed Vitry-le-Perthois to the ground (for some reason), and later François I built Vitry-le-François in his own honour. Kings, eh?

At breakfast our paper placemats were maps of France showing the location of all the hotels in the chain to which ours belonged, and it was quite surprising to see just how much of France is still south of us. We were delighted to find that we were officially south of Paris now, though.

We saddled up and headed out, and it was only after about 20 minutes that we realised that we’d managed to leave town without any navigational errors. That never happens! Sometimes it’s tricky one-way systems (Reims), sometimes it’s Gary the Garmin having a tantrum (Calais), sometimes it’s not being where you thought you’d start from (Ardres), but we always have to get off, consult various maps and scratch our heads before we get going properly. 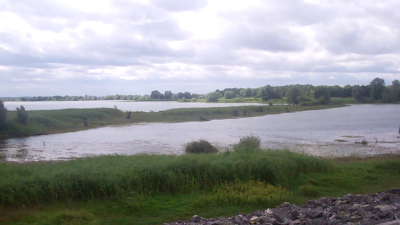 Not today though, we bowled along making great speed for the first hour in bright sunshine and a light headwind. With the wind growing in intensity we arrived at the Lac du Der, where we joined a cycle path around the edge of the lake. The cycle path was elevated, above the lake on one side and the road on the other, and with that extra height it was incredibly breezy. The lake was very picturesque, stretching off into the distance, and we’d expected to see lots of birdlife, but it must all have blown away…

We left the lake and headed south, trying not to fight the wind too much. Cycling into a headwind is really energy-sapping, you feel that you’re pushing hard but going so much slower than you expect, and the temptation is to push even harder to achieve the speed you’d usually have. On a shorter day like today, though, we could try to ignore the speed and just pedal as we usually would. We’d be slower, of course, but it wouldn’t really matter. 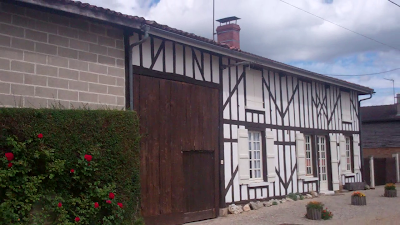 We stopped for lunch in Montier-en-Der, very typical of the villages we’d been cycling through. The houses here are mainly wattle and daub, not black and white like it would be at home, but dark and light brown, very attractive. 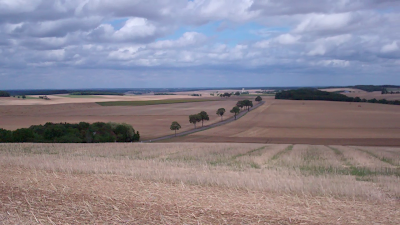 With few kilometres remaining, we pushed on against the wind, and finally reached the ridge we’d have to surmount to get to Bar-sur-Aube. As we climbed we entered a wooded section which sheltered us from the wind, and had some great views of the route we’d taken. After the climb, up over 1000ft for the first time on this trip, our reward was a long, winding descent into the valley of the Aube. As we reached Bar-sur-Aube we encountered a very sombre-looking march through the village. One of the gendarmes who was guiding the traffic away from the procession told us it was in honour of a local man who had been killed in an accident, a ‘marche blanche’ he called it.

We checked in to our hotel, the St Nicolas, and braved the freezing pool for a swim. They do say an ice bath is good for tired muscles!

Noticed a weird thing about cows today. If they spot you coming or you attract their attention as you reach them, perhaps by shouting “Moo” in a French accent, they turn their heads to look at you. They don’t follow you with their heads, though. They watch until they can’t see you properly, turn their heads a bit more, watch a bit more, turn again, watch again and so on. It looks really robotic. These are the things you think about as you tap along on a flat road into the wind…