We opened the curtains on the morning of our rest day in Aigues Mortes, half expecting rain, which has been a feature of rest days so far, but no, it was sunny, hurrah! We had a lazy morning, then wandered out for lunch, choosing a very friendly little restaurant down a side street, still inside the walls of the medieval city. We noticed a Vin des Sables on the wine list from Montcalm, and since we’d cycled right past those vines only the day before, we had to try it. It was lovely, of course. 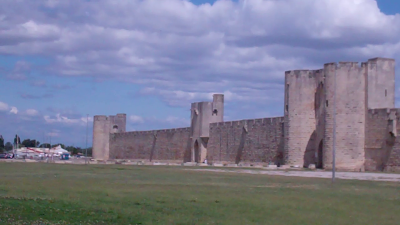 We realised that this was our third visit to Aigues Mortes, and on each occasion we have arrived by a different mode of transport, first by boat on the canal, then by car, and this time by tandem. Next time it’ll have to be on horseback, or in a helicopter or maybe a skateboard…? We had a quick peek in the church, which was all set up ready for the wedding of Chloe and Jean, and then spent the afternoon on the hotel’s sunny terrace and in the pool. An early dinner, and an early night, and our rest day was complete.

We’d planned an early start today, aware that it could be hot and was certain to be windy along the coast. Unfortunately, on wheeling the tandem out of the garage, we found it had developed a flat back tyre whilst snoozing in there. It was quickly sorted out, a ‘pinch’ puncture, we reckoned, where the tyre is pinched by the wheel rim, rather than something penetrating the tyre. 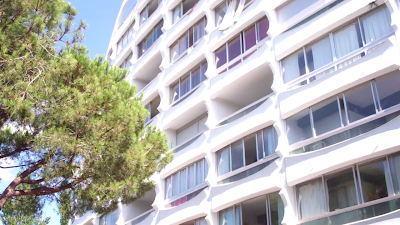 We headed out of Aigues Mortes’ medieval walls, and along the canal towards le Grau du Roi and then la Grande Motte. What a weird place – all the buildings are white, mainly apartment blocks in a very individual style, with no straight lines at all. The wind didn’t seem as bad as we’d feared, and we made good progress along the coast, seeing the sea for the first time since Calais. It seemed really strange to see water with waves after our many days next to the mighty Rhône.

At Carnon we stopped at an open bike shop, where we borrowed the track pump to make sure the rear tyre was sufficiently inflated, and checked with the owner on the next part of our route. We’d tentatively planned to cross to Palavas-les-Flots along a tiny spit of land between the sea and the Etang de Mauguio, which looked to have a path along its length. The owner of the bike shop confirmed that there was a good path, although he came out to check that he thought our tyres were suitable! 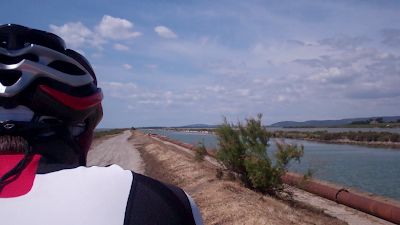 We followed his instructions to find the start of the path, and struck out across the spit. It was barely 15 feet wide, running next to the Canal du Rhône à Sète which divides the sea from the brackish Etang, quite an extraordinary sight. It was pretty windy, but the surface was fine except for a short section where some maintenance vehicles had cut it up into ruts – we walked that bit!

After around 10km on the tiny sliver of land we rejoined the mainland near to Frontignan. The wind was incredibly strong now, right in our faces, very energy sapping. There was a good cycle path alongside the road, and next to that was the Etang d’Ingril, which was full of windsurfers and kite surfers making the most of the wind. We headed into Frontignan for lunch, and were directed by a helpful local to an Italian cafe bar. Its owner, Luigi, initially said he’d stopped serving food, but then offered us a salad provided we could be done in half an hour as he had to be somewhere at 2pm, and ended up providing delicious ice-creams to follow and telling us about his friendship with Geoff Capes! He was definitely late for wherever it was he was going!

After lunch we navigated around Sète, spotting bits we recognised from our canal holiday a few years ago, including the hotel where various items of clothing were left (you know who you are…!), and then headed out on our second spit of land, this time between the sea and the huge Etang du Thau. This time the spit contained the cycle path (an official voie verte), the road and a railway line. Or at least it did to start with, until the voie verte finished abruptly, leaving around eight other cyclists and ourselves to hoist our bikes over a fence onto a gravel path.

The path ran alongside some vines, and a tall bamboo screen had been planted to protect the vines from the crosswind. The bamboo also benefited the cyclists, it really broke up the wind, and we were very grateful for the shelter. After a few kilometres hiding behind the bamboo we reached the end of the Etang, and the start of another voie verte. We had a long chat with a lovely Norwegian cycling couple, who told us we should come and cycle in Tromsø ‘to warm up a bit’!

A last grind into Agde, and we arrived in our hotel just in time to see Mark Cavendish win the last stage of the Tour de France into Paris, and indeed the green jersey, first Englishman to do so. Good for him!

Given the wind and the heat, we’ve rescheduled slightly, aiming tomorrow for Port-la-Nouvelle. There have been no flamingos so far in any of the etangs we passed. Fingers crossed for tomorrow, our last day amongst the etangs.

One Reply to “Stage Eighteen: Aigues Mortes to Agde”