…in which we break our speed record, and another spoke.

We stayed at a hotel on the edge of Bourg-lès-Valence, perfectly comfortable and friendly but in a commercial area, next to a “Buffalo Grill”. We ate in an Italian style restaurant, notable mainly for the arrival of pimp-rolling drug-dealer types part-way through our meal. For some reason they seemed to get preferential treatment!

We’d chosen the hotel for our rest day because it had a lovely swimming pool. So it was no surprise to open the curtains to torrential rain. Still, we had a very relaxing day, watched Mark Cavendish win yet another stage of the Tour de France (hurrah!), then the sun emerged at about 5pm, just in time for us to have an aperitif by the sadly neglected pool. 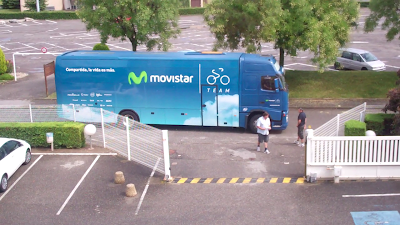 All through the late afternoon we watched vehicles arrive in the car park, some belonging to Tour de France officials, some to the two teams staying here for their rest day: Katusha, from Russia and Movistar, from Spain. We were thrilled to discover that the main rival to Mark Cavendish for the (green) points jersey, Jose Joaquin Rojas, was staying in room 214 (we were in 216), so we were very tempted to throw a noisy party at 4am! 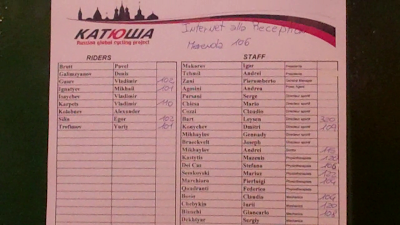 We ate in the hotel restaurant, served by somewhat distracted staff who were eagerly awaiting the arrival of the two teams. The receptionist had insisted we arrived early for our meal, so we arrived at 7pm, ate a leisurely dinner with an excellent bottle of Crozes-Hermitages (one should always try the “local” wine!) and returned to our room at about 9pm, by which time there was still no sign of either of the two teams. In fact their coaches arrived at about 10pm, disgorging some very stiff and weary-looking riders who were no doubt very much looking forward to their rest day.

Mindful of the fact that we had a long day ahead of us we rose early, with the aim of being on the road by 8am. We’d already packed most of our possessions into the panniers last night, so we grabbed a quick breakfast (we did wear our cycling gear but there were no Tour riders around to see us) and set off on the eastern side of the Rhône. The traffic was fairly busy as we crossed a bridge over to the western side and headed south through Soyons.

The Rhône valley is the obvious transport route south, so river, rail and road are sometimes squeezed into a fairly narrow corridor on the valley floor. Today this limited our options for diversions onto more minor roads, but the main N86 running south on the western bank of the river served us well – it was busy, but not overly so, and with a smooth surface, a light tailwind and the cooler morning air we were able to set a cracking pace as we approached the place in which we had originally planned to stay at Le Pouzin. Passing Beauchastel we could see that it was beau but couldn’t see a castle – perhaps it was set back from the road. What we could see were the limestone cliffs of the Ardêche (giving way to sandstone later in the day) and the occasional striking volcanic outcrop.

After two hours of cycling and more than forty-five kilometres we decided to stop for refreshment in the village of Meysse. Obtaining coffee and fruit juice from the café, we tried the boulangerie for a morning croissant, but it was shut. Not a problem, the tiny supermarket provided other choices and, as elsewhere in France, the café owner was happy for us to eat food purchased from other premises on his small sunny terrace. 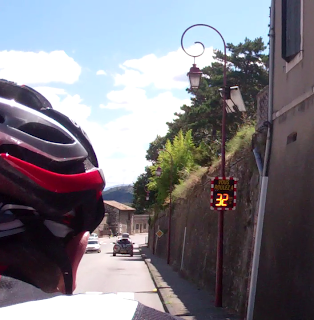 We were really pleased with the pace so far, and after our short break we rejoined the main road, speeding along in the bright sunshine and making the most of the tailwind. We passed Montélimar on the other bank without really catching a glimpse of it, heading on toward Viviers. At this point Clare spotted a group of riders on the other side of the road and, as usual, waved vigorously at them. There was absolutely no response, and as they grew closer we realised why – it was the Saur-Sojasun Tour de France team, out for a leg-loosening ride on their day off!

It’s becoming apparent now that we’ve reached the south of France. The first thing we noticed, over the last couple of days, was the increasing noise from cicadas. Today we started to see dry river beds, Cypress trees and a change in the arable crops – there’s still plenty of wheat, but now we’re seeing signs for tomatoes, courgettes and asparagus. We haven’t yet seen any lavender, but we’ve certainly smelt it. Now we’ve entered Provence (this section of the blog is hereby subtitled “A Gear in Provence”!) the signs at the start of each village are shown in two languages: French and Provençal (a dialect of Occitan, or the langue d’oc).

After another thirty kilometres, achieved at a very good rate (for us, anyway!) we lunched on Quiche Lorraine and Croque Monsieur at Pierrelatte in a sunny square. On leaving there we cycled past the enormous nuclear power station at Lapalud, before crossing the river to the eastern bank at Bollène. Suddenly, to the south-east, we spotted a huge mountain with a bare rocky summit surmounted by a meteorological station. It could only be Mont Ventoux, which we will be attempting to climb in a couple of days. It looks daunting!

It was beginning to look as though, even on a long 69-mile day, we would be in our hotel room by 4pm. Whilst speeding down the N7 near Mondragon, though, we thought we heard a ping from the rear wheel and, when we stopped to check, we found another broken spoke. While this is not a major problem in the short term (each wheel on our tandem has 48 spokes, so the wheel is robust), it is not something to ignore for a long distance. Unfortunately, as before in Villefranche, the offending spoke is on the “cassette” side of the wheel, that is, the side of the wheel with the gear cogs. This means that a repair requires a bike shop, as the cassette must be removed in order to gain access to the spoke.

We cycled the last kilometres into historic Orange, which has an Arc de Triomphe, said to date from the reign of Augustus, and a fantastic Roman amphitheatre. Dropping off our bags at the Hotel Lou Cigaloun we cycled off in search of a helpful bike shop. It being Monday (French shops are often closed on Monday for a long weekend) we found only two shops open, and neither of them could help us, at least not today. We’re promised assistance at 11am tomorrow, and this should be fine as our cycling day tomorrow is a short one – 22 miles and a climb of 1300 feet to Bedoin, “base camp” for any attempt on Ventoux.