… in which we have to turn around. A lot.

St Pol on a Sunday night was pretty much shut (not unusual in France). We decided against the friterie (French for ‘chip-van’!), and the kebab shop, and went into the only open café, not expecting very much. The pizzas were absolutely delicious, though – pizza savoyarde, with lardons, potato and reblochon cheese seemed to be the perfect combination of Italian and French food. We flaked out quite early after our first full day’s cycling, slept really well, and woke feeling refreshed and ready to go. 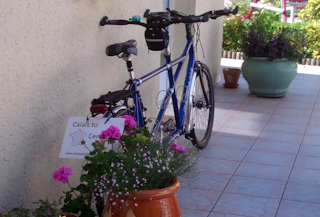 We’d noticed two fully-laden touring cycles in the hotel’s garden, and found at breakfast that they belonged to a Dutch couple, doing a two-week tour passing through several countries. They’d had a very long day yesterday, arriving in Hesdin to find that weddings had filled all available hotel rooms, and had had to cycle on an extra 25km to St Pol to find a room. It’s the worst thing on a tour – your legs are somehow exactly calibrated to the distance you are expecting to ride, and when you get to that distance it’s incredibly difficult to persuade them to go any further. So we did feel for them, and of course they had more kilometres to make up today to get back on route.

After breakfast we packed up and headed out, finding our first turning and confidently heading up the slight hill. After a short while we encountered a little roundabout, and no more road… We quickly realised that we should have taken the slightly scrubby-looking track on the left at the bottom of the hill, so we turned around, setting (had we but known it) the theme for the day.

The track quickly deteriorated until at one point we were actually cycling on grass! We had deliberately tried to plot routes which avoided the more major roads, preferring minor roads and surfaced tracks where possible, but this was a bit extreme! We stuck with it, and after a short section through a wood we popped out onto a better surfaced track, and then eventually tarmac. We were right in the middle of all the fields of crops, with great views over the surrounding area now we had gained a little height. We crossed with a family with two small children riding small ponies, and a beautiful tiny foal following alongside. 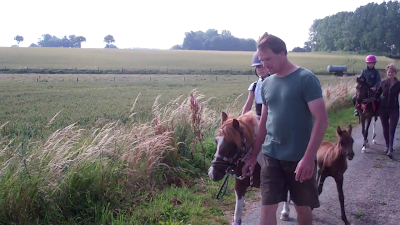 The tracks through the fields continued, and we passed through lots of tiny agricultural villages. It was quite hot, very sunny by now, but with a head wind which (for a change) we didn’t mind at all, as it was keeping us cool. The roads were slightly undulating, giving us small easy hills and then some gliding down the other side, perfect really. We hardly saw any traffic at all, although we did have to move off to the side to let a huge tractor past at one point.

The route was pretty complex, and even with the assistance of Gary the Garmin we missed several turnings, especially in the little tracks through the fields, and had to stop, turn around and go back. We never went very far before we realised we were wrong, fortunately.

As the day went on we started to see more and more of the Commonwealth War Graves Commission cemeteries, with their distinctive white headstones in lines. We were approaching the Somme region, where the huge battles of the First World War claimed so many lives.

We’d earmarked Miraumont for lunch, slightly concerned that the only bar there would be shut, it being Monday, but we arrived to be warmly welcomed by the lady patron, who asked us all about our trip, and was very patient with our dreadful French in reply. It became clear that this was one of those places where there is just a ‘plat du jour’, and that’s what you get. It was quite a feast, three courses (we declined cheese as well!), all beautifully presented and absolutely delicious. We asked for ‘un express’ to finish, but this was not allowed, because it would be ‘trop fort’, so we meekly accepted café noir instead.

After a few minutes sitting around letting lunch digest a little, we saddled up and headed back up into the vfields. We knew we were only a few kilometres from Thiepval now, site of one of the war memorials, and sure enough after we had gained enough height we could see it on the horizon. We passed more cemeteries, including Owl Trench cemetery, opposite which was an enormous round crater, which must have been the result of a mine during the war. It was all grassed over now, nearly a hundred years later, and grazed serenely by some cows. 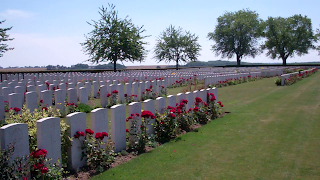 We stopped and went into High Wood cemetery, where over 3300 British soldiers of the Great War are buried. It’s beautifully maintained, as they all are, but a sobering reminder of the catastrophic loss of lives in this area. We wandered around, completely alone except for the birds singing all around. It’s such a peaceful region now, full of fields of crops, it’s almost impossible to imagine what went on.

Nearing the end of the day now, we descended to the Somme river, crossed under the A1, and coasted into Péronne, where we are staying for two nights. It’s a rest day tomorrow, and we’re going on a guided tour of the Somme battlefields, including a visit to that memorial at Thiepval, seen so far only from the next ridge.