…in which we cycle through a land of expensive bubbles.

The Hotel de la Paix was handily situated for a street full of restaurants. We chose Brasserie Flo, which had a sunny terrace, and it proved to be an excellent selection.

Reims has a one-way system. In fact, it boasts the one-way system from hell. Worse still, Google maps shows some of the arrows the wrong way round. So it was with some difficulty and a fair quantity of illegality that we reached the cycle path on the bank of the canal south of the city centre. It was worth it, though – broad smooth tarmac next to the glittering water of the canal. A number of other cyclists and joggers were using it too, and we received plenty of friendly greetings. 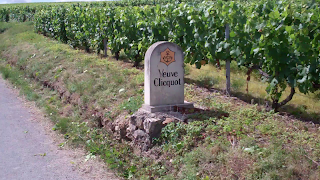 Near Taissy we left the cycle path and joined the road to Sillery, crossing the busy A26 autoroute, familiar from our journeys south by car. Unfortunately we also turned into a 15mph head-wind, which slowed us down considerably. It was tough going for a mile or two until we turned away from the wind. Suddenly, we noticed vines. Everywhere! We had clearly found the start of the Champagne-growing area. The vineyards bore labels: Louis Roederer; Veuve Clicquot; Taittinger; Mumm. Clearly, these hillsides were worth a bob or two. For five or six miles we cycled through vines and over undulating terrain until we arrived at Condé-sur-Marne (near the aptly-named “Bouzy”), where we turned south-east toward Châlons-en-Champagne.

We were out of the vineyards now, back in cereal territory. A long, straight and frankly rather dull road took us into the industrial area north of Châlons, and ultimately to the “centre-ville”. Searching for somewhere to eat we ended up at a place serving Döner kebabs, and very nice they were too!

After lunch we set off in the direction of Vitry-le-François, still some 25 miles away. We were cycling close to the River Marne for the entire afternoon, but rarely saw it. The terrain was undulating and the head-wind was fierce. The villages we passed through were pretty and interesting, but the roads in between were long and straight and surrounded by cereal fields. The village names were good though: Togny; Sogny; Pringy; Vitry; Drouilly; Mairy. That’s almost a full set of dwarves by our reckoning! 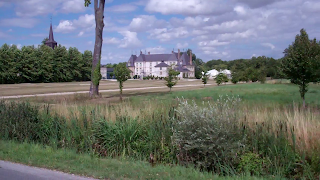 After an afternoon of hard work we turned off the D2 at Couvrot, joining a narrow canal-side track that brought us in to Vitry. After negotiating a few roundabouts we arrived at our destination: the Hotel du Tambourin, just in time to see Bradley Wiggins take a Tour-terminating tumble. Poor Bradley.

Our destination for tomorrow is Bar-sur-Aube, a place in which we’ve stayed before. We hope that by tomorrow the wind will have changed to a more helpful direction!