We walked out down to have a look at the river last night, and then found a great restaurant for dinner. We had to wait for ten minutes or so before our table was free, so we helped ourselves to a couple of bar stools in the corner and sat at the bar. As soon as we sat on the very posh-looking height-adjustable stools, the seats descended gently towards the floor – we felt very silly, of course they were in the corner, they were broken! Our table was soon ready, and we forgot all about it, until a second couple appeared (briefly) at the bar, sat on the broken stools we’d stupidly left there, and descended gently to the floor, just as we had, until all that was visible was the bun on top of the lady’s head.

After dinner, we headed back to the Hotel le Sauvage, which had been a good choice, our room was lovely, with parquet flooring and beautiful tiling. There was no sign of any Bastille fireworks. We slept well, and headed off in the morning after breakfast under patchy skies. 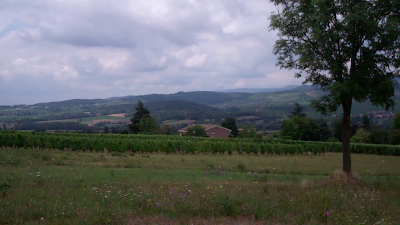 We knew we had some climbs coming early today, the last for a few days, and as we hit the first one Jonathan shifted into the smallest chain-ring, the one which makes the climbing easiest. It felt a bit odd, and when we stopped to investigate we discovered that it was egg-shaped, having lost some of the bolts holding it on. We’ve been fully-laden up some steep climbs in the last weeks, including the Struggle in the Lake District (25% in several places and 3 miles long) and the steep climb on the way to Nuits St Georges, which felt like it was at least 16%, so perhaps we’d just over-strained it.

We realised, though, that this was the first time we’d used the smallest ring since that big climb, because the terrain hadn’t really required it, and that provided we could get over today’s fairly modest climbs in higher gears, we’d be fine for the next few days without it, and indeed for the rest of the trip, Mont Ventoux excepted. 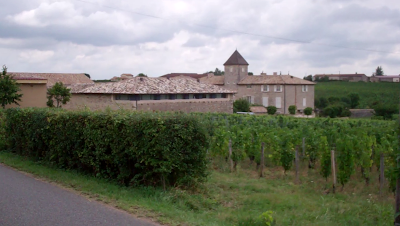 So we pushed on, taking it steadily over the next hills, cycling in vines again today, the Mâconnais district now. It was really pretty, surrounded by hills and the roads incredibly quiet. As we passed through one village the local inhabitants were observing the Bastille Day commemorations, heads bowed and flags held at half mast. It seemed a bit disrespectful to flash past in a blur of lycra, so we stopped and waited until the citation was complete.

As we headed up the last climb we were joined by a French cyclist, who chatted away and asked us lots of questions about our trip. It was good to chat with him, and it does take your mind off the climb, trying to recall the French grammar you last used properly as a teenager! On the back of his shirt was a map of some of the serious French climbs, the Tourmalet, the Galibier, the 21 hairpins of Alpe d’Huez. He confirmed that he’d done them all – we were very impressed! He did say they were all ‘tres dur’…

After the climbing was done we glided down towards the floor of the Saône valley, with fantastic views on either side. We arrived in Crêches-sur-Saône to find an open cafe serving Turkish food, which was a relief, this being Bastille Day and hence a public holiday. A very cheerful group of motorcylists was having lunch outside. It was at this point that we discovered the French equivalent to ‘She’s not pedalling on the back’, when one of the motorcyclists shyly came up to out table and asked very politely how it all worked – did we pedal at the same time, did the person on the back have to pedal all the time? They were all very friendly, and suggested that when we got to the Spanish border we should keep going to Santiago di Compostela! 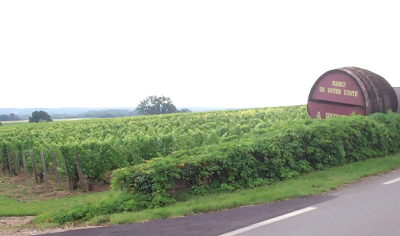 After lunch, we continued through the Beaujolais vineyards, and had our second mechanical problem – a loud twang from the back indicating a broken spoke. We followed the recommended option of slackening the spokes on either side, and continued, knowing that it was flat for the rest of the day and not far to go. Tandem wheels are very strong, with 48 spokes, so we were confident it would hold.

Before long we were coming into our day’s destination, Villefranche, where there are five cycle shops. Our plan is to pop in tomorrow morning and see what, if anything, they might be able to do. It would be good to get the spoke replaced (we are carrying spares) and the wheel trued, but there may be nothing they can do for the chain-ring. Not replacing that would put paid to our attempt on Mont Ventoux, although we would have no problem continuing to Cerbère and the border without it. We have various options over the next few days if we can’t resolve it here in Villefranche, so we’ll keep you posted!