… in which we have a day of firsts 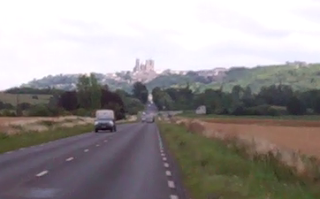 It was a warm evening in Laon, much warmer than when we called in here in February in the car on the way back from Italy. We had lunch then up in the medieval centre of Laon, and had intended to stay up there on this trip, but there were no rooms available last night at the only hotel we knew. Our hotel was down by the station (but very quiet, no train noise), so we had a trip up to the medieval centre for an aperitif, on the ‘POMA’ – a sort of tram-like thing, similar to the San Francisco cable car system, where the car grabs onto a moving chain which takes it up or down the hill. It was a bit rattly, and with no driver in the car itself, slightly disconcerting! The medieval centre is up on a huge hill, you can see the cathedral for miles around. Consequently the views from up there are spectacular, we could see the long straight road on which we’d ridden in.

The POMA only runs until 8pm, so we returned after our drink, and had an OK meal at a restaurant near to the hotel.

We were up and about early this morning, and set off in bright sunshine out of Laon. We soon turned off the main road, and found ourselves in lovely quiet lanes through sleepy villages. We tested our climbing legs briefly on a short climb, and were rewarded with fantastic views back to Laon cathedral, over 10k away. A gliding descent followed, then we climbed again over the second ridge, and enjoyed a second descent, happy to outrun the horseflies who had kept pace with us on the way up.

It became much more difficult to play cereal crop bingo today (wheat, maize, beets, HOUSE!), we’re starting to get to the end of the ‘breadbasket’ area of France, we’ll soon start to see vines as we get closer to the Champagne region. 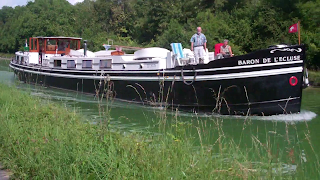 At Bery-au-Bac we found our first voie vert of the trip, a wonderful smooth wide tarmac path especially for cyclists next to the canal. There are lots of these in various parts of France, although they don’t seem to be widely advertised, and it can be difficult to find the entry point. It was wonderful, we bowled along at a good speed, waving to the bargees as we outpaced them. Their speeds are restricted to protect the banks of the canals, so it wasn’t really a fair race. Every so often we would encounter a lock, which for us on the cycle path meant a short incline to get up to the next level.

We had expected to go all the way into Reims on the voie vert, but it appeared to finish unexpectedly at a bridge, and we had to switch onto a reasonably busy road into the centre. Not very pleasant, but we put our heads down and pounded along. We got a bit tangled up in the fiendish one-way system, but of course on a bike you can always get off and walk the wrong way, so we were soon at our hotel. 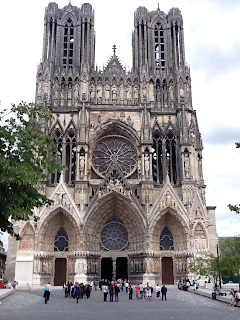 A quick shower and some lunch, then we headed out to the cathedral, which is very impressive. It was badly damaged in the first world war, losing many of its stained glass windows, which have been replaced with very striking abstract new windows which we liked very much.

On our way back to the hotel, we heard our first accordion of the trip (well, you’d be disappointed if you didn’t hear at least one in France), and then headed to the hotel pool (another first of the trip) for a leisurely swim.

A longer day tomorrow to Vitry-le-Francois, properly into the Champagne region.