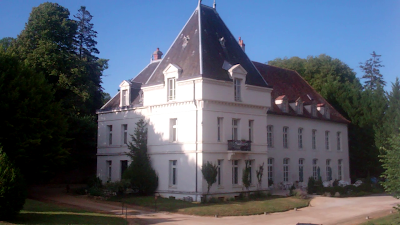 We enjoyed our stay at the Château de Malaisy very much. We’d chosen a lower price room, but it was clean and bright, and dinner in the restaurant in the evening was superb. Quite a menagerie was to be found in the grounds – horses, donkeys, goats and sheep, various cats, a peacock and a frilly white French hen. Oh, and some wild German children who were up until all hours.

We were away by 9am, conscious that this would be a long day with a big climb, and left under sunny skies, soon warming up the legs on the initially flat road. In fact, like yesterday, the road was climbing almost imperceptibly, but it was gloriously winding today, with constantly changing views of beautiful countryside. It made a nice change from the ruler-straight (Roman?) roads of yesterday, we really enjoyed the contrast. 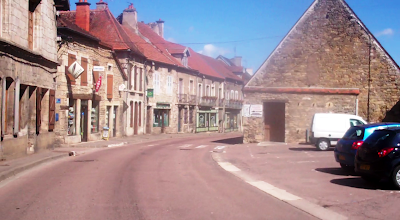 The hills rose on either side of us, fields full of cows (doing the robotic head thing) now, rather than arable land for the most part. We stopped in a picnic area to eat an oat bar to fortify us for the climb, and when we got there we were glad we had – it was awfully steep! We climbed for about 3 kilometres, gaining hundreds of feet in height, until we reached a plateau at around 1750 feet. Yes, we’re still for some reason measuring the climbing in feet, even though we’ve gone metric on distance. Not sure why…!

It was awfully hard work in the heat, but it was soon done, and we rode across the plateau gaining further height, although more gently, until we topped out at just short of 1900 feet, next to an enormous electricity station. It was huge, with long lines of pylons marching up the hills around it to meet at the top.

After the climbing, of course, was the descending, and we quickly dropped down to the valley of the Ouche, riding alongside the autoroute for a while until we reached the canal. Right next to the canal-side cycle path at Pont de Pany was a restaurant, which were very glad to see. We had a good lunch with lots of really good bread and some blond beer, and after all the exertions of the morning it brought us slowly back to life. 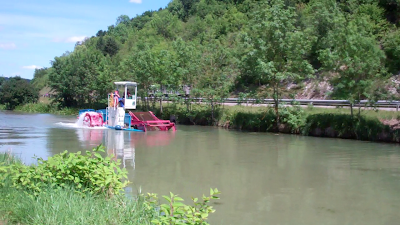 The cycle path next to the canal was our next direction, and it was fantastic, wide smooth tarmac right next to the canal. It was incredibly popular, lots of cyclists, a few pedestrians and even a roller-blader. We cycled past an older gentleman, and bid him ‘Bonjour’ and as we went past he caught sight of the sign on the back of the tandem. The sign says ‘Calais to Cerbère’ and has a little map showing our route. On the road we get lots of toots and thumbs-up from passing motorists, and on this occasion the gentleman cycled hard to catch up with his wife, whom we were now just passing. He shouted ‘Cerbère!’ after us, giving us an opportunity to use ‘The Joke’, which is to say ‘Oui! Mais pas aujourd’hui’ (copyright: Rob and Jon, in their excellent account of a similar journey to ours, ‘Wine-ding down through France).

We loved the cycle-path, a brilliant way to enter a big city like Dijon. We knew we’d have to leave it just before Dijon to pick up the Route des Grands Crus, and we were just gliding to a halt to check the map when a fellow cyclist pulled up to see if we were lost. Our fellow tandemists, John and Ann, had told us that they had found everyone really helpful during their recent tour in the more southerly areas of France, and it was just so here too – we hadn’t even quite stopped! We also had a halting but very friendly French conversation with another cyclist using the path. He was alarmed to hear we were proposing to go up Mont Ventoux later in the trip – he told us that it would be his 80th birthday in a month, and that made him far too old to do that sort of thing. Given how long it had take us to catch him up, though, we reckoned he’d still be bowling along the canal when he was 90. 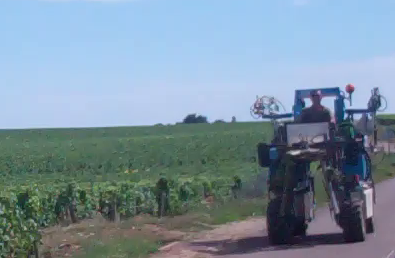 After skirting the very outskirts of Dijon, we hit the start of the Route des Grands Crus, a lovely quiet road through the vines. We started to see famous Burgundy names – Marsannay, Gevrey Chambertin, Vosne-Romanée. The villages were beautiful, and between them long sections of vineyards, with strange alien-looking machines straddling the vines in order to work on them.

We were soon approaching our destination for tonight and our rest day tomorrow, Nuits-St-Georges, and rolled up at our hotel, just a little out of town, but with a pool (hurrah!) feeling very tired after a long day.

What a brilliant day, though, the cycling had been wonderfully varied and we’d enjoyed it all enormously. We’re meeting our friends, Simon and Dianne tonight – they are on their way north after a long trip in Europe in their camper van, and it looks like our plan to rendezvous in wine country might just have worked!

So, a rest day tomorrow, then, having passed the watershed of France, it’ll be pretty much downhill to the Med. Oh, apart from Ventoux, of course…