… in which we ride with the brakes on for 8km

The very welcoming lady patronne at the Hotel Lou Cigaloun recommended three or four restaurants in Orange, and we headed out for dinner via the ancient amphitheatre. It’s very actively used, and there’s a series of events taking place there during the current weeks. We couldn’t seem to get inside, but the ancient stonework we could see outside was very impressive, and there were pigeons nesting high up in the walls.

We chose one of the recommended restaurants, Le Bec Fin, and had a table outside in the warm evening air. We had a great dinner, very friendly waitress, interesting menu, and a bottle of Gigondas, still a wine of the Rhône area, but from east of Orange. We were late enough back to need to use the access code – first time for that, and after well over 100km too!

It was very overcast when we awoke this morning, and as we were getting ready for breakfast there was suddenly an extraordinary racket from outside, which turned out to be incredibly heavy rain, the street was under inches of water in no time. After breakfast our hostess kindly rang a bike shop for us in Carpentras which we’d identified as a possible better option, and they were happy to expect us within a couple our hours for our repair. Carpentras is about half-way to Bédoin, our destination for the day, so this approach would mean we would waste less time waiting for the other shop to open. 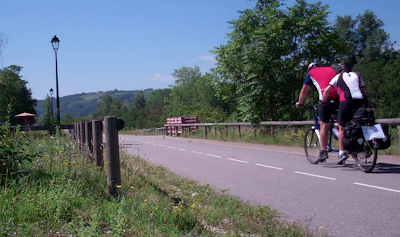 Jonathan was feeling a little off-colour, so we set off steadily, the rain having abated, thankfully. As we left Orange behind, a military jet started up and blasted into the sky to our left. It was lost in the clouds almost immediately, but we could hear it for ages. We closed the distance to Carpentras gradually, but becoming a little worried that the shop would have closed for lunch by the time we arrived, and after a bit of messing around with the one-way system we rolled up at 11:55. The sign outside said lunch was between 12:00 and 14:30, so we fully expected to have to wait, but the owners couldn’t have more helpful, and the spoke was soon replaced and the wheel trued.

We had a quick lunch in Carpentras, and ignoring Gary’s proposed very silly long way round route, set off on what we knew would be a climb up to Bédoin. We seemed to be going awfully slowly, no strength at all on the front, which we had put down to Jonathan’s malaise. “It’s like cycling with the brakes on”, he said. We looked at each other. “I’d better just check them”, he said, “just to be sure”. Ten minutes later, with the brakes released, we felt almost turbo-charged in comparison – we’d come 8km with the disk brake on the back partly stuck on! It must have happened somehow when the wheel was put back in. 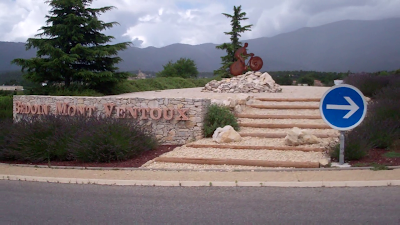 We climbed steadily, and much more comfortably now up to Bédoin at 1000ft, the start of the Mont Ventoux route, and then further to Pierravon at 1300ft, where we are staying for two nights. We arrived at the same time as a Dutch couple, he dressed in cycling gear. He’d been up Mont Ventoux today, and said it was pretty cold up there.

So, we’re here, at our Mont Ventoux base camp. Fingers crossed that we’re up for it tomorrow, that the bike is up for it, and that it’s not closed because of the wind – it’s forecast to be 30kph up there!

One Reply to “Stage Fourteen: Orange to Bédoin”