… in which we reach the Mediterranean.

It was early evening by the time we strolled along to the Pont du Gard, yet it was still almost stiflingly hot. We had visited before, years ago, but it was well worth a second visit. This Roman acqueduct, 160 feet high, and formed from three layers of sandstone arches, used to supply water to the city of Nîmes. It towers dramatically above the valley of the Gardon river, and in the evening light, was casting long shadows over the slopes below. In the river were canoeists and swimmers, and the bridge itself was host to hundreds of visitors, even so late in the day.

After a cooling drink at the café we strolled back to the hotel (liking this verb strolling, it makes a pleasant change from pedalling)! We liked the Hotel Le Colombier and its cheerful proprietor, and ate a good meal on the hotel terrace, watching bats swoop around the trees in the darkening sky.

The alarm was set for 7.30 – we were aware that the afternoons from here to the finish could become extremely hot, and so we wanted to get an early start and, if possible, an early finish! Not that we did ourselves any favours by taking the wrong road out of Remoulins – not sure what it is about leaving places first thing in the morning, but we frequently get it wrong. The effect of our mistake was fairly benign though, and we climbed quickly back up to Fournès, the hill that had caused us problems the previous day. Today though we had clearly got our climbing legs back, and ascended with no problems. 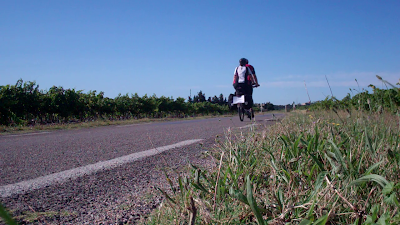 The climbs led us to the top of a low plateau, and to the lovely town of Montfrin, set attractively along the banks of the Gardon river. We hadn’t originally planned to climb to the plateau, but we were pleased we did – we saw apples, plums and olives in rows by the side of the road and, after a while, the vineyards of the Costieres de Nîmes appellation. These were a feature of the next twenty kilometres or so, as we passed through Jonquières-St-Vincent (getting slightly lost in the maze of tiny streets) and finally dropped down from the plateau at the town of Bellegarde.

We were already starting to see fields of the white horses for which the Camargue region is famous. In fact we stopped to talk to one (any excuse for a break). The temperature was rising now, as were the westerly winds, and after Bellegarde we had a long, fairly tedious slog along the D38. Originally we had planned to use the towpath of the Canal du Rhône à Sète for part of today, but on inspection it looked rough. So the road it was, for several kilometres before we followed the Centre Ville signs to the centre of Saint Gilles.

We had been here before too, at the end of a fondly-remembered canal holiday, and after an early lunch at the Café de la Gare we stopped on the bridge next to the Port de Plaisance for a nostalgic look. Soon thereafter we turned happily onto the quieter back-roads of the Camargue. We passed two teenagers on their bikes – one clearly regarded this as a challenge and set off after us, but our legs are battle-hardened now and we saw him off easily! 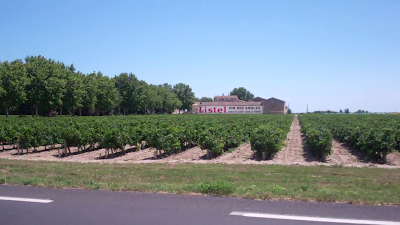 On entering the wetlands of the Camargue the landscape changed. By now we were down at sea level, and cycling past fields of rice and, later on, Vin des Sables. There were canals and water channels everywhere, and the rice fields were occasionally punctuated with fields of white horses and Camargue bulls. We saw countless dragonflies and, later on, an old stone tower topped with a populated stork’s nest. There were no towns at all, but occasionally a grand mas (Provençal for “house”). 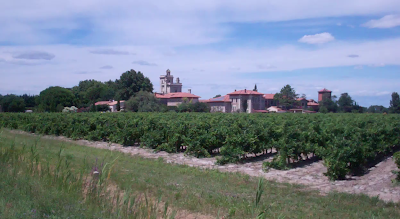 We had made good time up to this point,  but as we turned due west we were met with the full force of the wind. We battled against it, alongside the increasingly busy traffic, as we approached our destination. On crossing the canal we looked left to see (as we knew we would, from our previous canal holiday) the Tour de Constance, a striking feature of the town of Aigues Mortes.

For a while thereafter it was roundabouts, furniture shops, supermarkets and D.I.Y. shops until at last we arrived at the main gate to the ancient town. Dismounting, we walked inside the walls, wheeling the tandem past large numbers of visitors, in search of the Hotel Les Arcades. It’s an attractive place, set in the quieter streets away from the bustle of Aigues Mortes. The tandem was stowed safely away in a garage, where it will stay for two nights, as tomorrow is a rest day, which we intend to spend lazing around the hotel pool.

Over the last three weeks we have developed quite ridiculous cyclist’s suntans.  Our faces, lower arms and the ends of our fingers are brown.The tops of our knees too are nut-brown, the calves slightly less so. The remainder is a colour best described as “Yorkshire Summer”, an interestingly pale shade of white. It’s certainly an alarming site in the mirror. So we hope (carefully) to redress the balance by the pool tomorrow by embrowning some of the white bits!

We haven’t yet decided on our destination for the day after our rest day – we were hoping to stay in Marseillan but hotel rooms there seem scarce. We will have to investigate further.