…in which we cycle with raptors.

The skies cleared to blue at the end of the day in Bar-sur-Aube, and we took the opportunity to eat at “Le Jardin des Delices” (dans le jardin of course)! Despite the close attentions of a number of French wasps we had a very good meal, the steaks were excellent.

We awoke to cloudy skies and cool temperatures. This was not entirely unwelcome as we had our longest day yet in prospect. Thankfully the headwinds of the previous two days had diminished. Aware that we were going to need fuel for the day we tried to eat plenty of breakfast, but it’s not easy when you know you’ll have to cycle the first hour on a full stomach. We saddled up and set off at about 9am. 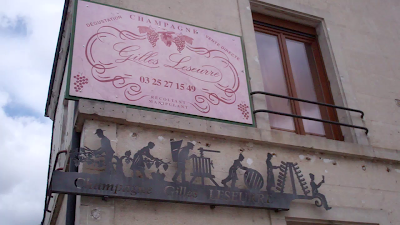 Bar-sur-Aube is still within the Champagne-growing region – we passed plenty of wine producers and pressing plants but few vines. The road south from Bar-sur-Aube follows the river south in a deep wooded valley, there was little traffic and we achieved a good average speed of over 20kph for the first hour. Every 10 miles or so we stop for a drink and to get out of the saddle – tandems don’t provide many opportunities for standing up while riding (“honking” in cycling parlance), so it’s important to have frequent breaks.

We crossed the A5 autoroute, which heads south at this point to Dijon, a city we hope to reach tomorrow. Above the fields on both sides of the road and sitting on fence posts nearby we spotted several birds of prey, some of them hovering skillfully in the breeze above their intended targets. It was blissful to ride in the absence of headwinds, instead it started to rain as we reached Montigny-sur-Aube. Initially the rain was light. Soon however it intensified and we were forced to stop and don our rain-wear. Before too much longer it was bucketing down, and despite our waterproof tops we were soon soaked. This sounds worse than it is – we discussed it and agreed that we preferred rain to wind any day! Once you’re thoroughly wet it doesn’t really get any more uncomfortable anyway, and it remained warm. 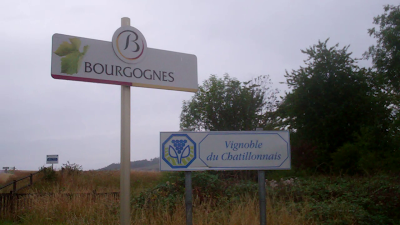 At Montigny we turned away from the valley of the Aube, and said goodbye to the Champagne-Ardennes region and hello to Bourgogne. The roadside signs now offered Cremant de Bourgogne instead of Champagne. For us, however, hot chocolate may have been preferable in the conditions. We were making very good time though and climbing steadily onto the plateau on which we would remain until Montbard.

When studying our route for the day we had identified Châtillon-sur-Seine as a likely lunch stop, although we were slightly concerned that, today being Sunday, all the eateries would be closed. So when we spotted an open créperie at the entrance to the town we grabbed the opportunity to stop for a bite to eat. The waitress, spotting our saturated state, moved us to a side-room where we couldn’t damage anything! Galettes were consumed and enjoyed, and we lingered over coffee, hoping that the weather was clearing. It was not to be – it was raining gently as we got back on the tandem and torrentially within minutes. 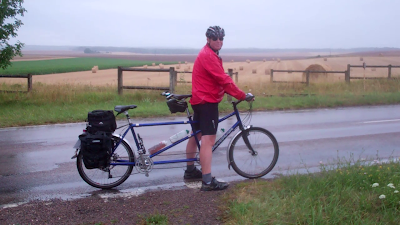 We were still enjoying ourselves though, and speeding along on undulating roads over the plateau. On passing through Ampilly-le-Sec and Coulmier-le-Sec we couldn’t help but notice that they weren’t very, well, sec! Coulmier-le-Saturées, maybe… Eventually the road dropped down toward Montbard, though we had to descend cautiously as the road was so wet.

At Montbard we turned south-east to Fain-lès-Montbard and found our accommodation for the evening, Château de Malaisy. Almost immediately on arrival the skies outside cleared to blue. Let’s hope they stay that way for tomorrow, when we face another 63 mile day and a long climb up to 1800 feet en-route to Nuits St Georges.