… in which we find the flamingoes at last. Both of them…

There were still a few hardy souls on the beach when we headed out to dinner last night, surprising given that the wind was blowing all the sand in great clouds off the beach into the sea! There was even a rainbow, probably down to the wind whipping droplets of water into the air. We had some good Italian fare at a beachside restaurant, and turned in back at the hotel, to get a good night’s sleep before our last full day’s cycling.

The wind seemed to have dropped this morning when we got up – all the palm trees were looking relaxed, rather than hanging onto their fronds for dear life as they had been when we rolled in last night. We set off out of Port-la-Nouvelle towards Leucate, knowing that we had to do a few kilometres on a busy road before hitting the minor coast road proper. But no! A side road loomed, and we realised we could take that nearly all the way to Leucate. It was lovely, through the vineyards, with friendly waves from the the secateur-wielding workers in the vines. 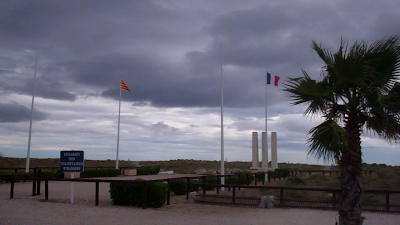 We reached the busy road, and a group of cyclists approached us from another minor road ahead. One of them told us that the minor road was a much nicer way right into Leucate, adding, in an impossibly sexy French accent, that we shouldn’t go on the main road because ‘eet eez vaire dangereuse’. We took this advice, since ‘vaire dangereuse’ is not a good idea at the end of a long tour, if ever!

And so it was that we finally caught up with the flamingoes. They must be on holiday or something, they’d left a skeleton team on tourist duties, with just the two birds in the Etang de Leucate ou de Salses. Still, it was good to see them at last. Leucate looked like a good little village, and it was shortly followed by Port Leucate, which was more of a holiday place, with seaside apartments and a very attractive beach.

We had another tiny spit of land to negotiate to get past the long etang, and found a completely unused road between the coast road and the etang, so we toodled along that, thinking how nice it was of them to build us our own road. There was a sign in French that said that it was just for emergency vehicles, but we couldn’t understand it, so we decided it was fine…

After La Barcarès, another pleasant seaside village, we picked up a cycle path, but it was very slow, it kept turning cyclists up winding concrete paths to the road bridges to cross rivers, so we chose the road instead, with its wide tarmac strip to the right for cyclists. At Canet-en-Roussillon our route planning fell apart briefly, when we arrived at a junction to see a ‘no cyclists’ sign on the road we had expected to use, in pictures this time, so there could be no doubt. Fortunately there was a voie vert just next to it, which initially appeared to go in the right direction. Unfortunately, it then headed off in completely the wrong direction, but had obviously been taken by lots of people trying to go the same way as us, because there was a clear footpath going our way. We walked the bike along the footpath for the hundred metres of disallowed road to the roundabout, where we were once again permitted to ride. 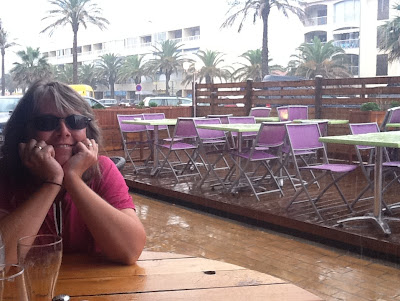 We stopped for lunch at St Cyprien, in a créperie with a very friendly waiter. Whilst we were finishing our lunch with a coffee, the heavens opened. Just as in Orange, the streets were soon awash, and hordes of wet people came up from the beach, heading for their nice dry apartments. Our friendly waiter kindly offered to call us a taxi and look after the bike for us until we could collect it! Tempting, but we had only around 15km to go, so we waited until the rain eased a little and set off. 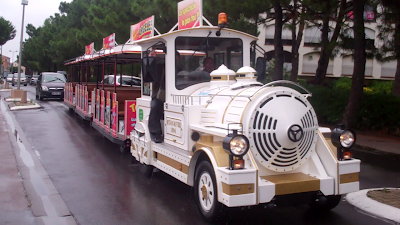 It wasn’t far to Argelès-sur-Mer, where we spent a holiday many years ago, and we’d just seen our first sign for today’s destination, and the original end-point of the trip, when the back tyre suddenly deflated. We had known that the tyre wall was quite worn, but had hoped it would last. No problem, we put in a tyre-boot to protect the inner tube, reinflated, and rode the last few kilometres into Collioure, where we are booked in for three nights. 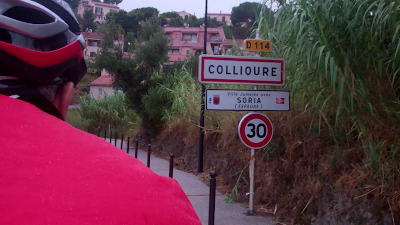 After a consultation with the very helpful hotel receptionist, we decided we would head back to the bike shop at Argelès to replace the tyre, since it was just a short trip in a taxi. Bizarrely, we had experienced exactly the same thing on the Lands End to John O’Groats ride, replacing the tyre for the same reason in Thurso. Our replacement tyre is even the same make as the one we were given in Thurso. Very spooky.

So we have one last bit of business tomorrow – the Spanish border. It’s only around 20km from here – you can almost smell the paella…