Our room last night at the Mercure had a great view of the Rhône heading off towards the Mediterreanean Sea, only slightly marred by the Autoroute du Soleil in front of it! The hotel had a restaurant which we decided to try, given that we were pretty tired after a hard day, and the only alternative nearby seemed to be a McDonalds. It was really busy, full of very tired looking groups and couples who had probably spent all day travelling. And us, of course, although we were feeling surprisingly perky, safe in the knowledge that the tandem was all fixed and fine now.

We were woken at 7:30 by a child running down the corridor outside having a loud tantrum in French, so we decided to get up and on our way. Initially our route took us along a busy road right next to the Autoroute, where there was a bit of a “bouchon” going on – at one point we were keeping pace with the cars going south, which must have been frustrating for them! 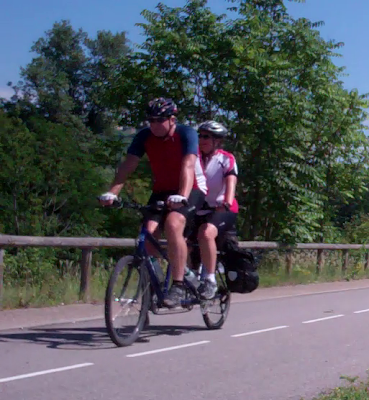 At Vienne we crossed the river and had just started along the road when we spotted a cycle path running right alongside the river bank. As soon as it was feasible we turned across the road to join it – it was a voie verte! It was brilliant, smooth and wide, away from the traffic and right by the river. It was very popular, and we exchanged greetings with countless cyclists coming the other way.

The Rhône had carved itself quite a valley, and we started to see vines growing on the steep valley sides. The process of viticulture must be very different here to the way they do things in Burgundy, because the terrain is so different. Here the vines grow on terraces cut into the hillsides, surely impossible territory for those alien-looking vine straddling machines we saw in the neat cordon rows of vines in Nuits-St-Georges. There were also huge ‘Hollywood’-style signs up on the hillsides indicating the vitner’s name.

The voie verte ended at an area of vegetable and fruit growing, and we wound on little paths through trees bearing apples, pears and apricots. It had an ‘allotments’ feel, and there were people tending the plants and trees in the sun.

At Condrieu, a very pretty town, we picked up the voie verte again, forewarned by others that it starts very anonymously in a hotel carpark (and it really does!) and rolled along very efficiently, enjoying the views of the river and the absence of all traffic. We headed into Sablons, and realised that the voies vertes in this area are now really well signed, with green lines and triangles on the road to guide you between traffic free sections. We stopped at a restaurant with a great shaded terrace outside and had some lunch, Jonathan declaring his pavé de boeuf the best in France so far – the host was very pleased! He gave us the right direction to rejoin the voie verte, and we were off and running again. 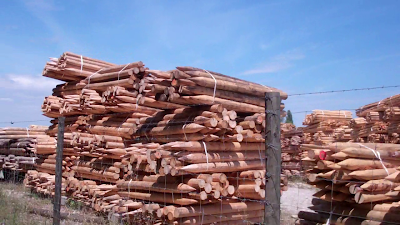 The path was partly shaded by trees, which gave us good respite from the sun, it’s been really hot today. There are trees alongside the path at various points, and their roots are just starting to disrupt the surface of the path – might become more of a problem in a few years’ time. We passed a fencing supplier’s timber yard, which had a lovely woody smell from the big stacks of prepared fencing stakes. They looked like bunches of enormous pencils. 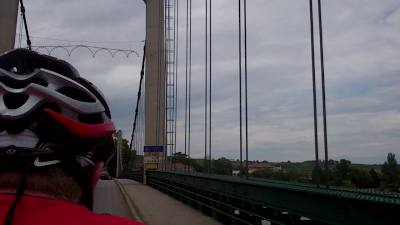 At Andarcette the voie verte ended, but a lady cyclist who had caught us up told us that we could pick up the next section at Tain-Hermitage, and that it would take us all the way to Bourg-lès-Valence, our destination for today. We joined the road, crossed the river, and time-trialled to Tain-Hermitage to find it. Well, sort of. We did stop for a bum-rest and a drink, and played ‘spot the wine-producing village’ – Crozes-Hermitage was a surprise, didn’t know that was in this area.

The last section of voie verte began as hard-packed sand and gravel, but soon gave way to tarmac, and before long we were arriving at our hotel, where we’re staying for two nights as it’s a rest day tomorrow. The lady receptionist was very welcoming and happy to accept the tandem into one of the conference rooms, but said we’d have to find somewhere else for it tomorrow night because two of the Tour de France teams are arriving here tomorrow night after the stage into Montpellier for their rest day. Jonathan says there is NO WAY we are going down to breakfast on Monday morning in our cycling gear….