Another lovely evening meal in the chambre d’hôte at Pieravon last night, during which we had, of course, only one topic of conversation – good job there was no-one else there to bore with our exploits! Thanks to everyone who commented, emailed, texted and phoned yesterday, it really made the day complete. Indeed, thanks for all the comments and contacts all the way along, it’s been great to have your thoughts and encouragement as we’ve made our way south.

The day dawned clear and hot today, and we had a later breakfast and then took some time to check over the bike, and repack the panniers and bag properly. We’d gone as lightly as possible on our Mont Ventoux attempt, so everything was all over the place. How so little stuff can spread out quite so far is one of the mysteries of touring…

We looked back at Mont Ventoux as we left, marvelling again at just how far up it looked. The clouds were scudding across the top again, the Mistral winding up for today’s cyclists. In Bédoin we could see people getting ready to set off on their attempts, and it felt strange to be heading out of the village in a downwards direction. It’s a good job we were, though, we had legs like limp celery after yesterday’s big effort! There was a tiny rise in the road at one point, not even twenty vertical feet, and we both found our legs suddenly burning with lactic acid. Should have gone for the ice bath… 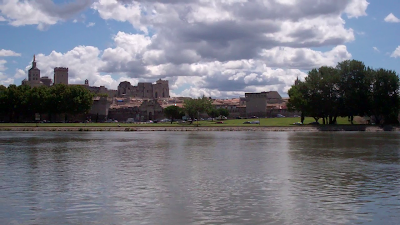 We rolled along down to Carpentras, not really needing to pedal for mile after mile, then out to Monteux and Bédarrides on wonderfully quiet roads between tiny villages. We were miles from Mont Ventoux now, but, as on the way in, it absolutely dominated the landscape. We turned south, towards Avignon, initially still on quiet roads. What followed was called the ‘Route Touristique des Bords du Rhône’, but it was probably the most uncomfortable section of road we’d encountered so far, dual-carriageway, lots of traffic, a wide cycleway at the far right, but with occasional broken glass to be avoided. We turned off with some relief onto the road towards the Pont d’Avignon, but it was worse! No cycleway now, and two lanes of constant traffic. We were given space by all the drivers, but it was an uncomfortable couple of kilometres.

The Palace of the Popes and the Pont d’Avignon appeared, and we hopped off the bike to take a look. The bridge now only partly spans the river, apparently it has been damaged by flooding many times over the centuries, finally being abandoned in 1668 after a particularly catastrophic flood.

We spotted a nice shady restaurant across the other side of the river, and threaded our way through the traffic to the road bridge, crossed the river and   declared lunch. There was a fantastic view from the restaurant to the Avignon city walls, the palace above, and the incomplete bridge, and the placemats helpfully contained the words to the ‘Sur le pont d’Avignon’ song, in case you felt like giving a rendition.

After lunch we headed off, still feeling rather underpowered after yesterday, but the cycling was flat and the Mistral kept us cool, even if it was trying its best to blow us back to Bédoin. We headed away from the Rhône for the last time, having followed it on and off from Lyon. We were amazed to see that the riverside markers now read 243k – back on the voie verte after Sablons it was only 63k.

The terrain has become very arid now, dusty and dry, with olive trees as often to be seen as the vines. The cicadas now provide a constant soundtrack to the day, so much so that we’ve almost stopped noticing it. Today we did realise though that the cicadas in a single tree seem to synchronise their rasping somehow, so that they are all scratching in the same rhythm. 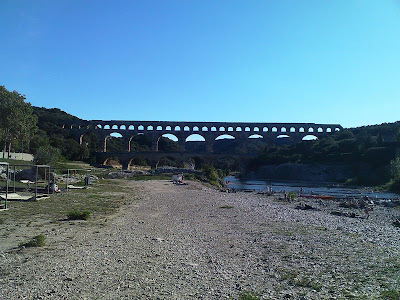 A small hill (requiring, for today at least, the smallest chainring!) took us to the autoroute, and after a few kilometres on the other side of it we hit Remoulins, and then our hotel for the night, just 800m from the ancient Pont du Gard. When the temperature has dropped a bit more, we’re planning a pre-dinner stroll along to see it.

Another shorter day tomorrow to Aigues-Mortes, where we’ll officially arrive at the south coast of France.