France was largely closed yesterday, for Bastille day celebrations. The hotel receptionist directed us to the only open restaurant in the centre of Villefranche: La Fleurie. Initially we were the only ones there, but the welcome was warm and the food excellent. We asked the owner to recommend a good cycle-repair shop (sounds daft I know but everyone in France either cycles or has a close relative who cycles). She was, in fact, delighted to be asked, and telephoned her son, who duly supplied the names, addresses and telephone numbers of two shops, both of which were close to the hotel.

We retired to the hotel and were just falling asleep when we heard the sound of fireworks. We opened the curtains and discovered that by leaning out of the window we could just see the spectacular short firework display, across the city by the river Saône. 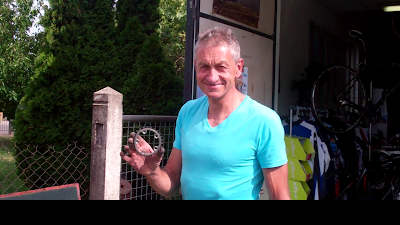 We rose and breakfasted early this morning, keen to get the tandem repaired. The first cycle shop we tried, unfortunately, was too busy. Worrying somewhat that this was going to be true of the other shops we cycled on to Jacques Desportes cycles. This was a much smaller, less modern shop, but encouragingly there was a cycle on the rack outside the shop undergoing repair. M. Desportes was the owner and sole employee, and asked us what we needed. Anticipating such a request (!) we had consulted our long glossary of cycling-related vocabulary, and were able to respond, in our usual halting fashion. To our relief he seemed to understand, and agreed immediately to replace the spoke and “true” the wheel. Initially he seemed rather less keen to fix the broken “petit-plateau” (small chain ring, sometimes known as the “granny ring”). After a few minutes he warmed to the idea and managed to find a replacement in his workshop. While he was working we noticed trophies and photographs on the wall of the shop – M. Desportes had been a veteran champion cyclist and, when prompted, he proudly showed us one of his “podium” photographs.

Within an hour the work was complete and our tandem restored to good health. We thanked him effusively, mounted the tandem and returned to the hotel to check out. Of course by now we had lost a good portion of the day, and we lost a further hour attempting to find an hotel or chambre d’hote for this evening. We tried several potential towns and villages but everything was “complet”. Eventually we found one hotel, the Mercure in Chasse-sur-Rhône, attractively situated next to the autoroute! We booked it immediately before it became full, and set off at about 11.30. 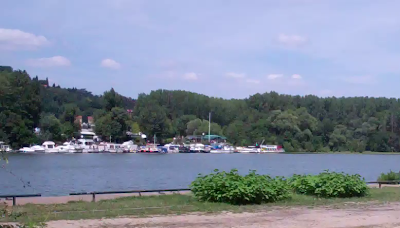 Half-an-hour later we were still trying to escape the city, victims once again of a tortuous one-way system. Eventually we crossed the river and turned south in the direction of Trevoux. The traffic was heavy, and we headed away from the main road at Parcieux, climbing steeply in search of quieter roads. This worked, briefly, before we were returned to the riverside road. There were cycle paths by the road though, good wide ones in fact, so we used those until, after about twenty-five kilometres we founds a good spot for lunch, on a terrace by the river. A cool beer or two helped to counteract the heat of the day, and lunch was good – the restaurant specialised in frogs’ legs, but we settled for more mundane fare! 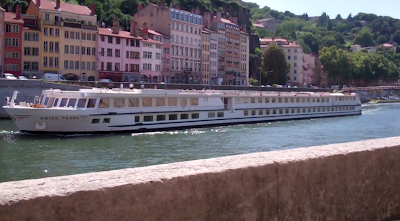 After lunch the traffic became progressively heavier as we approached Lyon, continuing along the riverside road. We passed an enormous Swiss river cruiser, long and low, clearly designed to pass underneath the low bridges hereabout. We stayed on the east side of the Saône as it approached the confluence with the Rhône. Spectacular palaces and mansions appeared on the sky-line to the west. Lyon was more impressive than we had anticipated, neither of us having seen it before. Spotting another tandem approaching we stopped to say hello to another English couple on a tour of Burgundy and the Rhône. Tandems seem rare in France, and those you do see are often ridden by British people. After a brief chat we headed off again, crossed the river to the western side and set off along the quay.

“Route Barrée”, said the sign. Oh dear – on checking the map we could see that the only alternative to our chosen route involved a steep climb on a busy road. We had no choice, though, so off we went, and it proved to be a good test for our new granny ring as we climbed to over nine hundred feet in the searing afternoon heat. We received plenty of support though – throughout today we’ve heard frequent cries of “Bon courage” and “Châpeau” from friendly French drivers.

Arriving at the summit of the climb we descended to La Mulatière and the river Rhône. There then followed a seemingly endless succession of traffic lights, all of them at red. After a while we began to look around, fearing some prankster was changing them all with a remote control! It was impossible to achieve a decent speed, so frequently did we have to stop. At last they were replaced, by a seemingly endless sequence of roundabouts, leading to Vernaison where we crossed the Rhône in search of our hotel, still a few kilometres away. Another steep and unanticipated climb took us to Ternay and the final descent to our hotel. A friendly receptionist locked our tandem securely away, and we headed to the bar for a large, cold bottle of fizzy water.

As a result of our lost morning we’re a little off-schedule, further north than we’d expected by 13km as the crow flies, but probably at least twice that along the river, so tomorrow’s destination is yet to be decided.