After a quintessentially English day at Headingley yesterday watching England lose the One Day International cricket to Sri Lanka and then Andy Murray lose at Wimbledon, we made good time down to Dover today in our hired van, tandem safely stowed in the back. We changed in the back of the van and emerged like Superman from a phone box, transformed into cyclists. Well, we hope so, anyway.

It was under two miles to the ferry terminal, the sun was shining and the traffic fine. Seagulls wheeled and shouted above us, and we could almost see France. What a lovely …. SPLATTT!!!!! 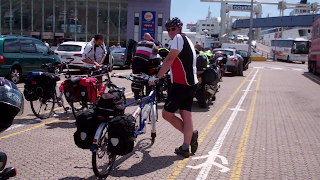 Suddenly, Clare is covered in smelly seagull poo. An absolute direct hit. It was everywhere, and no time to change before the ferry check-in. The seagulls were laughing and high-fiving each other now, but on the plus side all the port officials were keen to pass us through as soon as possible, we didn’t even show our passports. 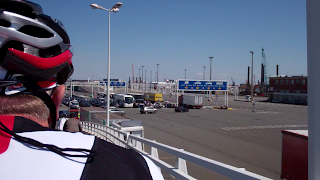 In no time we were arriving at Calais harbour, and were waved off the ferry along with two German cyclists before any of the cars and lorries. Clare was in a new clean top by now, so no credit to the seagulls for our rapid exit.

We followed the German cyclists out of the rather confusing port area, as they seemed to know what they were doing, and after only 400 metres heard the inevitable “She’s not pedalling at the back”. 400 metres… Still, it was an English van, and not in French, so it doesn’t count.

We were soon heading away from the sea, just a few kilometres to do today. Completely flat, alongside the Autoroute des Anglais to start with, full of les Rosbifs heading south like us, but just a little faster.

We’re just outside Ardres now, amazingly quiet and rural despite its closeness to Calais. Looking forward to tomorrow, our first full day in the saddle.