…in which we have some company, and join the River Saône 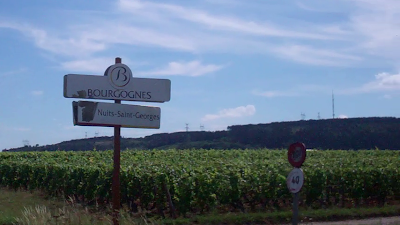 Our rest day in Nuits-St-Georges was a welcome opportunity to rest aching muscles and recharge batteries (real and metaphorical). No sooner had we finished washing our clothes and writing the blog than Simon and Dianne arrived on their tandem from their campsite nearby at Prissy. We had planned to go into town for a meal, but the restaurant in the hotel looked good, and we were tired after two long days. So we stayed at the hotel, ate well and drank relatively restrained amounts of Burgundy. 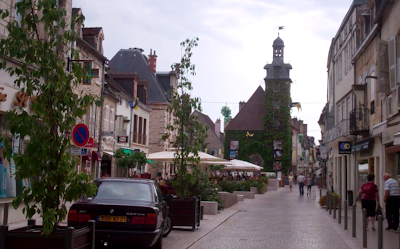 On the following day, against our better judgement (it was a rest day, after all) we got back onto the tandem for a massive one kilometre ride into Nuits-St-Georges. In the main square, next to the vine-clad belltower were sunny outdoor restaurants, perfect for a relaxing lunch, before we cycled back to the Hotel for a swim and some delicious cool beer. In the evening we returned to the town for a convivial dinner. Mindful of the fact that our cycling would recommence today we left Simon and Dianne to drink the town dry and returned to the Hotel, marvelling at spectacular bolts of lightning filling the skies to the east. In fact the impressive storms seemed to continue for some hours after we went to bed. 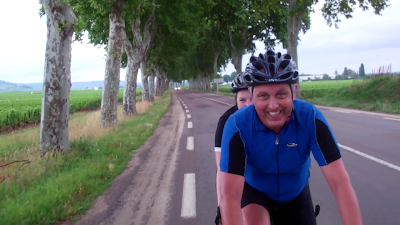 Today dawned cloudy and wet, but without thunderstorms, thankfully. We retrieved the tandem from the hotel garage and cycled the three miles to Simon and Dianne’s campsite, as they had decided to join us for the first part of today’s journey. So we set off, on our tandems, in tandem, in the direction of Beaune, initially on tiny roads surrounded by vines, and later, near Beaune, on busy, noisy roads (poor planning on our part, sadly), before returning to the quiet lanes toward Meursault. Dianne won “pun of the day” when she declared: “The quality of Meursault is not strain’d, it droppeth as the gentle rain from heaven”. She was wrong though, it was definitely rain dropping from the heavens, as we continued through Puligny Montrachet to our early lunchtime stop at Chagny. We ate at a small café, where the team, in jocular mood, were delighted to find “Frites petites” on the menu, and promptly set it to the tune of Reet Petite! 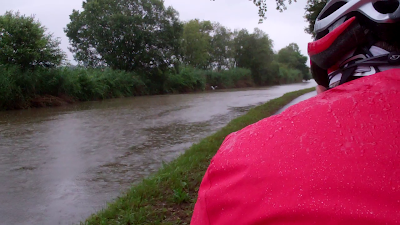 We said farewell to Simon and Dianne after lunch, they set off back in the direction of Beaune while we headed south out of Chagny (still in heavy rain). Almost immediately we found a voie verte alongside the Canal du Centre, heading south east toward Châlon-sur-Saône. The track was smooth and wide, beautifully maintained and enabled us to keep up a good pace for the next 16 kilometres, waving frequently at friendly boat crews who, despite the weather, seemed to be having a good time. So were we, it was a most enjoyable section. We spotted rental boats from “le Boat” (formerly Crown Blue Lines, before some fool in marketing decided on a name change!), familiar to us from our journeys on the Canal du Midi and the Charentes.

All too soon we left the canal, cycling on busy roads through the city of Châlon-sur-Saône. Cyclists were still well catered for, with good cycle paths throughout. Arriving at the River Saône we joined a rougher “piste cyclable” alongside the river. We had planned to remain on this track for the remainder of the afternoon. Unfortunately, after a couple of kilometres, it petered out into a rough muddy track. After much consultation, map-reading and head-scratching we formulated an alternative route, through a series of small villages en-route to today’s destination of Tournus. The villages proved to be attractive and well-kept, some with village wells. The roads were very quiet and generally flat. Eventually the rain stopped as we approached the main N6 into Tournus, joining it for the last kilometre or so to our hotel.

Tournus sits on the banks of the Saône, and has an historic church, (boasting a typical Gallic-style tower) once linked to a nearby Benedictine abbey. Tonight being the eve of Bastille day there may be fireworks (assuming they haven’t become damp in today’s heavy rain!) and other celebrations. We will report on this tomorrow, when our destination is Villefranche-sur-Saône.